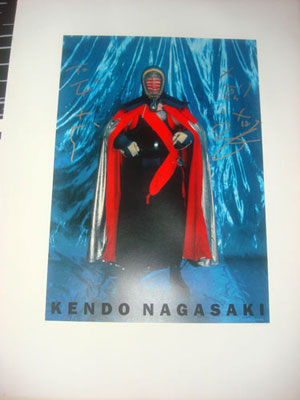 Your average Blake print is never cheap, but this Sir Peter Blake W is for Wrestler limited edition screenprint is definitely on the more affordable side.

It's an image that plays on Blake's obsession with wrestling, featuring the legendary Peter Thornley (aka Kendo Nagasaki), based on a photo by Terence Donovan. The print dates back to 1991 and was part of an alphabet series of prints, this one being sized at 510mm x 722mm (paper size 780mm x 1020mm).

It is numbered and signed by the artist (41 out of 95), but is said to have 'several faint marks to the left margins of the sheet' and 'a couple on the right', but they are outside of the printed area which is in mint condition. All would apparently be covered by a mount and are away from the printed area.

Saying that, CCA galleries is selling one of these for £1,000, so the current price of £275 seems like something of a deal.