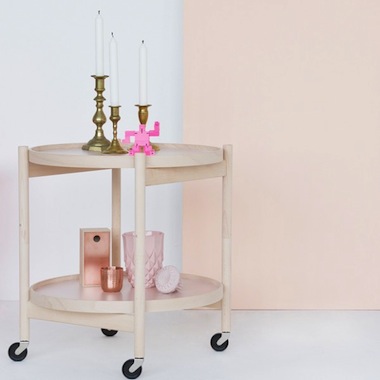 It's a piece that was only reissued relatively recently. But Hans Bølling's Tray Table has been given a bit of a make-over in celebration of its 50 year anniversary.

If you're quick on the maths, you'll realise the original tray table came out in 1963. The original table, a famous piece of Danish design, features black and white trays in a beech frame which could be detached and flipped to reveal a colourful red or yellow reverse. The reissue changes up both the material and the colour of the trays to create a number of different options.

Pictured is the Blossom Pink version – the cheapest option – with pink and white trays set in a beech frame. In contrast to this very pretty effect, the most expensive version features storm blue coloured trays and a walnut frame, making for a look suitable for the most serious of entertaining.

Buy them from Hus & Hem

Alessi Miniature range – small-sized classics from the past 60 years