Skip to content
517shares
Note all articles are independently researched and written by myself. However, if you buy via one of the links it may be an affiliate and I may earn a small commission.

We have featured a good few vintage Fiats, as well as a number of VW camper vans. But this is pretty much the halfway point between the two – a vintage Fiat 238 camper van.

The Fiat 238 was pretty much the multifunctional van of the 1970s in Italy – everything from ambulances and school buses through to general transportation. Or as is the case with this 1976, 1.4 model, a camper van.

This 238 was bought in Vienna before being driven back to to the UK before being upgraded with reupholstered the front seats and door cards and a new fibreglass elevating roof. The rest of the interior was left as it was originally installed, by Weinsberg.

Inside is a fridge, gas heater, two-hob cooker and sink, as well as plenty of storage options. The table also folds down level with the benches and the whole back part of the van becomes a kingsize bed.

The van has an MOT until August 2017 and is taxed until September 2017 and is described as being in ‘great condition both cosmetically and mechanically’, with plenty of general maintenance work listed – see the selling for page for details of that. There is the odd internal mark from use, but again, see the listing for that. It doesn’t sound like much. 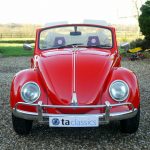