Skip to content
2514shares
Note all articles are independently researched and written by myself. However, if you buy via one of the links it may be an affiliate and I may earn a small commission.

If you like the idea of something retro for snapping your holiday, check out these newly-launched Polaroid x UO 600 instant cameras.

Both models are exclusive to Urban Outfitters and both exclusively online and have the kind of vintage look that really would;t have looked out of place at the seaside in the 1980s.

And not just in terms of the design. The colours too, which are described as ‘Blueberry Burst’ and ‘Apple Swirl’. Both pastel shades very reminiscent of that era.

Of course, these are classic Polaroid cameras, which means quite a busy affair (compared to the modern-era compact digital), but with everything you need to get instant photos in your hand as you shoot them. Well, almost. You get the viewfinder, the flash and the inner workings to process that snap, but you don’t get the film. That’s the downside of investing in Polaroid these days.

You can get the film, but it certainly isn’t cheap. At somewhere like Jessops, you can get a pack of film capable of shooting eight prints with the white frame for £17.99. So just over £2 per photo.

With that in mind, you really want to look after each and even shot. So keep it shielded for three minutes once you have taken the photo or it could be a very expensive mistake.

You can get the Apple Swirl model here and the Blueberry Burst model here. 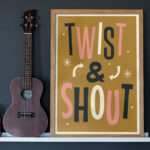