A watch very much of its era and all the better for it. The Picto watch by Rosendahl Copenhagen is a genuine 1980s classic.

The Picto isn’t just a watch. In fact, it started out as a clock, which is also a design worth considering for the home. But the watch is what I’m focusing on right now.

The design is as timeless as it is simple. Perhaps the simplicity makes it so timeless. That design dates back to 1984, the work of Steen Christensen and Erling Andersen, who were described as young Danish hippies fighting against the ‘time in money’ mentality where ‘every minute counts’.

They created a watch that took away those minutes, offering instead a broader indication of time for those who didn’t want to be a slave to it. In the process, they also created an icon of an era both for the home and for the artist.

That design lives on in an ever-growing number of colour combinations, as well as a number of limited editions and some premium versions along the way. Although personally, I prefer the classic colours. You really can’t beat the black on white.

But don’t take my word on it, have a look at all the styles, available for both men and women. As for price, this is one of the better-priced, starting at around £115.

Titanic DNA watch – made from bits of the old ship 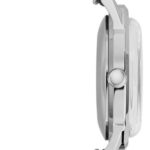