Yes, a Bowie kids book. Which goes by the name of David Bowie – Little People, Big Dreams and is available to order now.

I thought I had featured this series before, but a scan through the archive says not. Well, I’ve not done a full search (there are thousands of finds), but none are jumping out at me.

With that in mind, let me introduce it to you. The Little People, Big Dreams range is an ongoing series of books that have featured everyone from Marie Curie through to Coco Chanel and Ella Fitzgerald along with many many more. All female though, at least until recently.

The range has now opened up to some male icons as well, with the next batch of releases featuring Stephen Hawking and Muhammad Ali as well as the man here, David Bowie.

The books past and present follow a similar path, exploring in words and eye-catching imagery the lives of outstanding people and their ultimate achievements. But the important thing is that they all began life as a child with a dream.

The books are available as board books with simple sentences for younger children or as hardback books (like this one), which are more expanded stories for early readers.

Bowie’s story (presumably) skips some of his more controversial moments, as you would expect of a child-friendly book. In fact, this is a summary of what you get…

As a child, young David had a head full of songs and ideas. He was inspired by the pop and mod scenes in Britain to pick up the saxophone.

After earning his stripes in some of the coolest bands in London, David splashed onto the solo scene.

His songwriting talent and musical skill made him one of rock and roll’s all-time greatest artists. This moving book features stylish and quirky illustrations and extra facts at the back, including a biographical timeline with historical photos and a detailed profile of the musician’s life.

Perfect for a kids’ read and possibly of appeal to Bowie collectors too. Nice idea for a gift as well. The book is available to pre-order now ahead of the 2nd May release date, the price a discounted £7.19.

Find out more about the book at Amazon

A to Z Paper Plates from Oliver Bonas 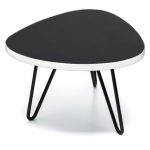 Midcentury-inspired Tica Table range for kids by The Rocking Company