Not quite a time capsule, but this 1960s coastal midcentury modern house in Sandgate, Kent is packed with original details.

It was something of a time capsule when it was first discovered though. Back in 2011 this first appeared on the market with very few changes since its construction date of 1964. But that’s not always a good thing.

Work needed doing to this house and subsequent owners since 2011 have renovated and restored this house to what you see now. It’s quite something. As a result, the price of the house has jumped as well. More on that in a moment.

But for now, I’ll focus on the house, which is a dream seaside getaway or an all-year-round gem if you want to be near the coast and see the sea from your window every morning.

A striking design, it was the work of John Floydd, who created something that took inspiration from the Scandinavian modernist design of the time. Yes, wood is everywhere here and amazingly well-preserved as well. At times, you really could be back in the 1960s.

But even better, as someone has updated things to bring it back into the modern era. Not that you would notice, but the house has had a new heating system, upgraded windows, rewiring and added insulation. I suspect it once got rather cold in the winter here.

Outside of that, it’s just about making the most of what was created in the mid-1960s. Little has changed in terms of the construction and exterior, with a steel frame, cladding in aluminium and timber, a red concrete tile hanging and a monopitch roof the first things to catch your eye as you approach the house.

Once inside you can experience that well-maintained exterior, with the wooden floors, walls and ceiling, open-plan space and bags of periods touches. Yes, the kitchen might look a little more modern, but the original units were long gone before this hit the market for the first time sadly.

The house is laid out over two floors, with access through the carport, which takes you into a hall and ground floor space. That’s limited to a ‘light filled’ studio, a shower/cloakroom, a utility room and an adjacent workshop/store/ The main living space is above.

In fact, that upper space, accessed by a wonderful 1960s staircase, is dominated by an open-plan, triple-aspect living room, dining room and kitchen, complete with picture windows for the sea views.

Obviously that’s not quite all as the house has three bedrooms to the rear overlooking the garden, as well as a study (or 4th bedroom) with sea views to the front, along with the family bathroom which has been upgraded, but still has plenty of originality to it.

Outside space too, which includes the carport, a secluded front and side garden and a ‘Mediterranean style’ terraced garden at the rear, alining with a large timber deck terrace with sea views.

It doesn’t come cheap though. All the work carried out on this one has added up, with the current guide price at £700,000.

All images courtesy of Phillips and Stubbs. If you want to know more, do visit the website. 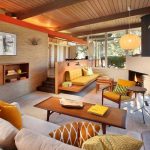