Now, this is lovely. The Man Who Fell To Earth movie poster at John Lewis, all framed up and ready to go.

It is a very unusual print to find on the high street too. It’s part of a mini range (and perhaps a growing range) of vintage film posters available at John Lewis, but the other three posters are vintage classics of The Ladykillers, Brighton Rock and The Man In the White Suit. Amongst that company The Man Who Fell To Earth is a little out of place.

But it’s also the one that stands out. I’m sure you can hunt around and find a poster/print of Nic Roeg’s 1970s sci-fi classic if you want to. But I suspect it might be harder to find one ready to go, mounted, framed and ready to go straight on your wall.

The finished produced has an ash frame and is sized at 823 x 62cm. Of course, the image itself is the star of the show and if you happen to be a David Bowie fan, that pretty much sells itself. Arguably Bowie’s most stylish era and incarnation. Love that font, the colours and the overall imagery too.

It’s a image that has stood the test of time and really does work as an eye-catching focal point for any wall. The framed print, like the others in the series, sells for £130.

If you want some Bowie-themed alternatives, do check out the Ziggy Stardust concert poster by The Indoor Type and the A Clockwork Bowie limited edition prints by Carl Glover. But personally, I think I prefer this one.

A to Z with added cool: Alphabet print by Anil Mistry 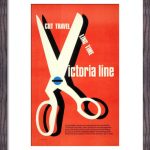 10 of the best: Midcentury advertising posters at King & McGaw