No, there isn’t a catch. You really can buy a 1960s modernist tower for just one Euro if you have an idea for something to do with it.

The tower can be found in Assen in Holland, with the seller ignoring the option of selling this to the highest bidder. Instead, you can have it for just a solitary coin if you have a feasible and realistic plan for the tower and you can complete the work within three years.

So yes you get it for a Euro, but you will need to think of something to do with it and fund that idea. You can’t just sit on (or sit in) this tower for years without any action. If you do, you’ll just have to give it back and presumably the whole process will start again.

As for the tower, it was designed back in 1960 by architect W. ter Braake, a radical departure from the older water tower in the city it was replacing. The modern design stands at 34m high and is made up of a hexagonal shaft and a cylindrical reservoir, topped off with a flat roof above.

On the plus side, the tower and its water reservoir with a capacity of 550,000 litres was renovated back in 2007. So you would hope that the jointing and concrete work, which was repaired at the time, as well as the renewed roof, would still be fine just over 10 years on. Especially as the tower hasn’t been in use.

But it is still owned by the water company, who are loathe to knock it down. Hardly surprising. This is quite something and you would presume, something of a local landmark. With that in mind, it is being offered at that low price to a potential buyer willing to finish off the renovation and give this a new lease of life.

That could be anything as long as it serves a useful purpose. A ‘Grand Designs’ living space or your own Bond villain’s lair (and quite a stunning one too if done well), perhaps a workspace, maybe a B&B or rental (this could be a quirky Airbnb rental), perhaps a retail space or cafe. It’s basically down to you and an idea that would work in the city.

The expense isn’t the purchase, it would be the money needed to make that idea a reality and with a three-year deadline, you really would need access to funds sooner rather than later. That might exclude a few people.

There is another expense too. If you want the subsurface and adjacent plots of the water tower, you have to buy those separately – and they are owned by the local authority. That means another purchase realistically.

So more than that single Euro needed overall, but still much cheaper than you would imagine for a stunning modernist structure in a prime location in the city. Do it well and it could prove a profitable venture for someone and a place to visit for the rest of us.

You can find out more about the tower, see more images and see a video of the tower and surrounding area at the Watertoren Assen website. You can put in your plan at that website too.

All images courtesy of Watertoren Assen. 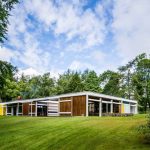 Architectural London prints by Will Clarke