A pioneering design back in 1970, the Hamilton PSR was the first-ever digital watch. It’s now coming back.

When I say coming back, I mean just that. A replica of the Hamilton PSR is returning to the shelves 50 years after it broke the mould for a wristwatch, shifting time-telling from hands to digital numbers and setting a trend that is still with us today. Digital was the future.

The PSR, which was named after the Pulsar Time Computer (which is where the inspiration for the watch came from) is a very basic watch. The appeal is basically history and authenticity. It’s a good-looking thing too.

Although when I say authenticity, this isn’t an exact replica of that past watch. The new version has a ‘hybrid’ display rather than just the LCD of the original.

The original version only showed the time when a button was pressed. With the new one, the time remains readable all the time, with an OLED display activated when the button is pressed to make the digits ‘pop’. Other features include a sapphire crystal anti-reflective coating and water resistance for up to 330 feet.

There are two versions of the watch heading our way, the first being a yellow gold limited edition model in a run of 1,970 units, said to be $995 (or the local equivalent of that) and a standard version in steel selling for the equivalent of $745.

You can sign up now at the Hamilton website if you want to know more and/or get your name down for one of the watches. 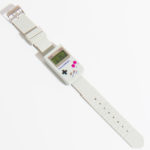