No one is claiming this is a high-quality deck. But the Gadhouse Brad retro record player is ridiculously cute.

I’m saying that because as soon as I post this I know social media will be full of comments about how you should buy something more sensible and pricey for your vinyl. I’ll be honest, maybe that is the case if you are a serious vinyl head.

But not everyone is. Some people might just have a few old finds from the charity shop or just a modest collection of records that want to be played rather than collected. If you are a collector, you probably have all the kit. If you are not and just want something that’s a little more ‘fun’ for spinning a few discs, then this might be for you.

The Gadhouse Brad is a colourful turntable that looks like something from the 1950s or 1960s. But it’s actually a very modern piece of kit.

Ok, its sole intention is to play your vinyl and with that in mind, it isn’t all that modern. But this isn’t a straightforward deck. It also has Bluetooth connectivity, so you can stream tunes via your phone or tablet to it, should you be lacking that song on disc.

It also has pitch control, three speeds, a 3.5mm audio jack, RCA audio out with cable plus a set of retro controls on the front. 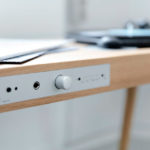 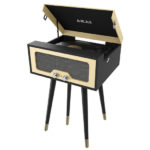