No, I am not joking. This is a Fisher-Price Chatter Telephone for adults, able to make and receive calls just like a real phone.

I know. It looks like a toy. And that’s pretty much the point. This is designed to look like the iconic 1961 Chatter Telephone for kids, a design that has been entertaining little ones for decades. We had one for our children. In fact, it’s probably still in the toy box. Some things are tough to part with.

One of those costs around £10 and is available pretty much everywhere. The adult version costs a bit more and is harder to find. But trust me, you will want to find one for your home. This is the conversation starter your hallway needs.

The design has been tweaked a little since the early 1960s, but this is still the classic Fisher-Price kid’s phone. And as far as your visitors are aware, that’s pretty much what it is. But there’s far to this than meets the eye.

This special edition for the design’s 60th anniversary makes and receives calls. Just like your standard home phone. If you still have one. Well, not quite like your home phone as this one connects, via Bluetooth, to your Apple or Android phone. Which in some ways is better, although you do need to be within 15ft of it to connect.

You get something like nine hours of talk time on the Chatter Phone from a single charge and it comes with a speakerphone button if you don’t want to talk using the red plastic handset. That novelty might get a little tiring after a few uses.

Want one? So do I. But there is a slight issue. This anniversary phone is an exclusive at Best Buy, which, at present, doesn’t ship outside the US. Although if you are a US reader, that’s not really a problem.

What might be a problem is this being a limited edition. So act fast or miss out. It retails for $60 and is on pre-order if you are keen. 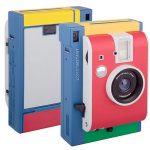