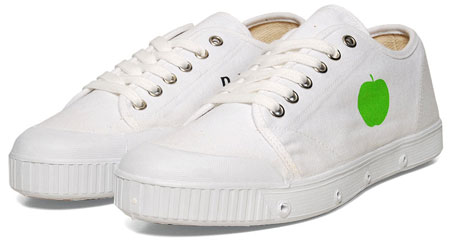 It's made in very limited numbers in Japan, it's made by Comme des Garcons and it has the Fab Four's official stamp on it. You just know this Comme des Garcons x The Beatles clothing and accessories range isn't going to come cheap.

But if you love the band and like a bit of exclusivity, it could be for you. The range includes Apple / The Beatles-branded t-shirts, polo shirts and a rather pricey, but very eye-catching transparent tote bag, which you can see over the page.

But the most interesting design is this reworked Comme des Garçons x The Beatles Spring Court plimsoll. We have featured the originals in the past, which were popular with '60s mods and worn by John Lennon on the cover of Abbey Road. The new version has both the Apple and Beatles logos, plus the exclusivity of course. However, this limited edition is almost three times the price of the basic version at £110, so maybe for the hardcore fan only.