Remember the Ford Cortina? In the days when petrol was cheap, it was the big car every Dad aspired to. Room for three kids and the dog in the back, plus enough room in the boot to move house. Sadly, we fell out of love with cars like the Cortina as fuel prices rose and the competition from overseas grew. Let’s face it, later models weren’t exactly sexy.

The car is back on our screens now in Life On Mars (not to mention re-runs of The Sweeney on digital), but for some, the Cortina never went away.

Simon Jones runs World Of Cortina. He’s what you might call a fanatic with 300 toy models, 6,000 pirces of memorabilia – and 14 actual Cortinas in his collection. It’s all his parents’ fault – they owned one, joined the "Owners’ Club" and he followed suit at 17. And never looked back.

The World Of Cortina features everthing Cortina – and as an obsessive, also everything that uses the Cortina name outside of cars too. Have a look, you might want to buy one. They’ve got the same capacity as a people carrier, but unlike said motor, they’re not an sign that your life’s at an end. 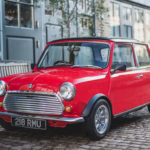 One thought on “World of Cortina”