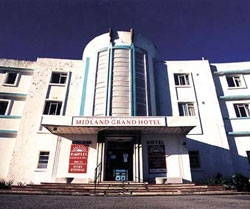 Today’s Retro Retreat is a little different – because you can’t actually stay there right now – though all that might change in the next couple of years.

The Midland Hotel was built in Morecambe in 1933, the first Art Deco hotel in Britain. It’s got outer walls electrically polished (creating a marble effect), a huge spiral staircase, curved balconies and hallways (for sea views), carved stone seahorses by Eric Gill on the facade and a covered terrace pavilion with views of Morecambe Bay.

It received Grade II listed status in 1976, but declined in line with Morecambe’s decline as a resort, finally closing and falling into disrepair in 1998. But here’s the good news – developers Urban Splash are currently re-developing the hotel to return in to its former glory as a 46-room hotel. It’s in conjunction with the various development agencies, tied in with investment in Morecambe itself.

When completed, it should be the coolest place to stay in the north of England.