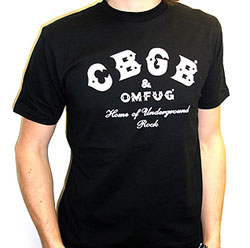 With the BBC getting big on the sounds of New York right now, it seems like a good time to feature something from one of its institutions – the CBGB t-shirt.

Probably the first name you’ll think of when it comes to music in the city, it opened its doors in 1973, closing last year, but probably peaking in influence during the mid 70s, where it became the home for rising US punk/alternative acts including The Ramones, Television, Blondie and the Talking Heads.

The t-shirt is something of a timeless classic. The one featured here is imported from the US and officially licensed. It’s available in a range of sizes and colours, along with two slightly differing designs.

You can pick it up from Balcony Shirts from £19.

One thought on “Classic CBGB t-shirt”