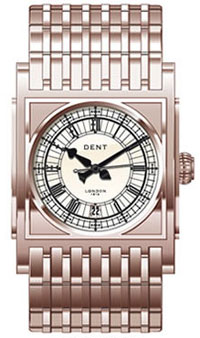 In 1852, the contract for the House of Parliament Great Clock (aka Big Ben) was awarded to Edward J Dent. And the Dent company is still making timepieces. Indeed, just to come full circle, it has just produced its first new watch collection for 40 years – and based a number of the watches on that design for Big Ben.

The watch featured here is just one of the models in the Dent Parliament series, with the range featuring a choice of straps and materials. This particular one has an 18ct rose gold case, 18ct rose gold bracelet and white face with black detailing and hands.

We know they’re due on sale in the coming weeks, but right now, it’s almost impossible to find any prices – although I suspect that it’s one of those if you have to ask, you probably can’t afford one.

View the full range at the Dent Watches website