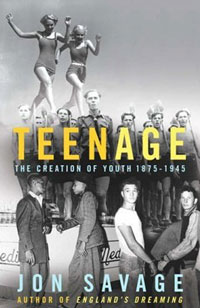 From early in my life (or to be exact, from reading Absolute Beginners for the first time), I always thought the teenager was a product of the late 1950s – I think there’s a piece in the book describing how you previously jumped straight from childhood to adulthood. Well, according to Teenage: The Creation Of Youth 1875 – 1945, that’s certainly not the case.

Author Jon Savage (yes, he of the excellent pop culture books, including England’s Dreaming) goes back to 1875 (when the first teenage memoir appeared and the first teenage mass murderer was tried), taking in locations like London, New York, Paris and Berlin, with individuals, street gangs and organised youth groups covered all the way through to 1945. Everything from the hooligans to the boy scouts and Hitler Youth, not to mention music and fashion crazes, including flappers, ragtime and swing. And indeed, how the "adult" world has always sought to profit from the teenager.

Out now in paperback, with a hardback to follow in two weeks, you can pick it up for around £14.

“All Books Should Have Pictures” Illustrations & Prints