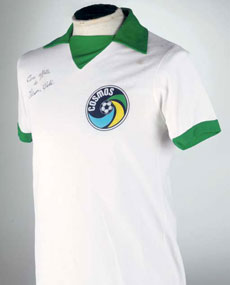 Watching the excellent Once In A Lifetime documentary last night, once thing became obvious – the New York Cosmos were and are the most hip football (or should I say ‘soccer’) team ever.

Mixing the skills of Pele, Beckenbauer and Carlos Alberto with a bunch of local chancers was one thing. Throwing money in every direction to pull in the crowds was another. And of course, there were the off-pitch antics at the legendary Studio 54 too. It lasted for just a couple of years before both the public interest and corporate investment died – but it did leave behind a huge amount of memorabilia.

Just browsing eBay today, there’s so much of it around – and for very little money. For example, there’s a 45 record of the club’s official theme tune, an original ticket from Pele’s second game with the club – there’s even a Chelsea programme from 1978 – when the Cosmos came to Europe. Numerous items come up all the time – and my guess is that this stuff is only going to rise in value. If only I had bid for that original Pele shirt (pictured).