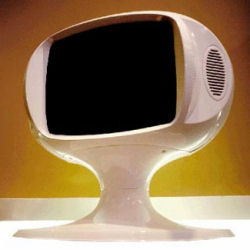 The Aphelion Television by Stephen Foster was first available in the UK in the early 1970s. This was a period when the idea of space travel had captured the imagination of the population and this set takes its name from a term relating to orbits around the Sun.

The Aphelion is available once more, retaining its classic shape but with updated television technology – Nicam stereo sound, APSI and two scart sockets.

Pop UK is selling Aphelion sets, priced £2145, in black or white, although apparently it is being produced in red and orange too.

One thought on “Aphelion Television”