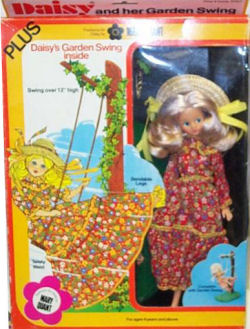 The fashion dolls available for children today are largely charm-less lumps of plastic. Comparing Bratz and modern Barbie to dolls of the past is like comparing the Spice Girls to the Supremes or the Ronettes.

Gina Garan’s Blythe Dolls now have a cult following and sell to collectors for pretty high prices. Not as sought after, but still an interesting doll is the Daisy Doll by Mary Quant. Back in the 1973, the same year that she opened her shop Bazaar, Mary Quant designed and launched this doll, named after her trademark flower logo. As well as the doll, Quant designed a host of stylish outfits, typical of the era, to dress Daisy in and production continued for ten years.

Daisy Dolls pop up occasionally on Ebay but the Magic Toy Box has a quite a few in stock, with prices starting from £120 up to £200, as well as a good choice of outfits and accessories. At those prices, Daisy is best kept for the serious collector rather than as a gift for a drooling four-year old. 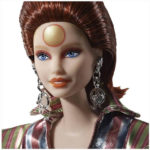