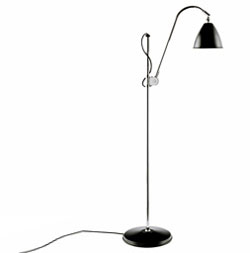 We have featured the original BestLite table lamp previously – an iconic light that’s still in production today. But we haven’t mentioned this really eye-catching variation  – the BestLite BL3 floor lamp.

The original BestLite is claimed to be the first piece of Bauhaus-style design to have been made in Britain, specifically by Birmingham company Best and Lloyd, from a design by Robert Dudley Best. It became the must-have lamp of the era, with Winston Churchill famously using one on his desk during wartime.

This floor lamp version is almost identical to the classic table lamp, with the obvious exception of the height – standing at an adjustable height of up to 1120mm.  The price is higher too – although not massively so at £429, which is around £150 more than the table version.