Skip to content
52shares
Note all articles are independently researched and written by myself. However, if you buy via one of the links it may be an affiliate and I may earn a small commission. 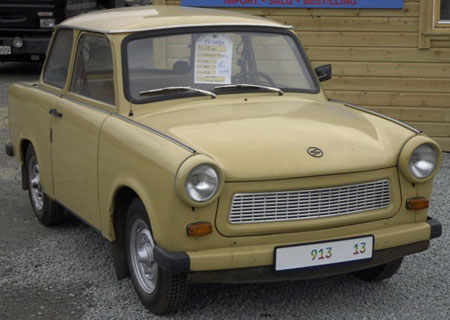 Hot on the heels of the Fiat 500 comes another cult car from the archives – the Trabant – which is set to be re-launched in 2009.

The Trabant was the car of the common man in East Germany from the 50s through to unification, a light and durable car with a two-stroke engine and plenty of room for a family of four. Amazingly, it was also eco-friendly before its time, using ‘duroplast’ for much of the car’s structure – a recycled material, made from cotton waste from Russia and phenol resins from the East German dye industry.

The new Trabi is being made by a company called IndiKar, based in the
east German state of Saxony. According to Ronald Gerschewski, the
director of IndiKar: "We want to build a grown-up version of the famous
Trabi. It will be simple, inexpensive and, of course, comply with
contemporary security and environmental standards."

It is said to have the looks of the original Trabant (pictured above),
but with a modern, fuel-efficient and environmentally friendly engine
and a price tag of just over £7,000 if all goes to plan. We should be
able to see the new Trabat ‘in the flesh’ at the International Auto
Show in Frankfurt in 2009, where a prototype will be officially
launched.