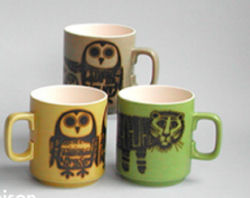 If you’ve got an interest in retro British pottery, you will probably already be familiar with the name of John Clappison. John Clappison was appointed Chief Designer for the pottery company Hornsea in 1958 and continued to produce acclaimed pieces for them until 1987. His work is quite typical of the mid-century period and is now sought after by collectors.

Spirografica have some John Clappison mugs for sale, dating back to the 1970s which feature pictures of animals. They are selling them for £25 each.

Similar pieces do come up fairly regularly on Ebay where they do sometimes sell for a bit less depending on the design.