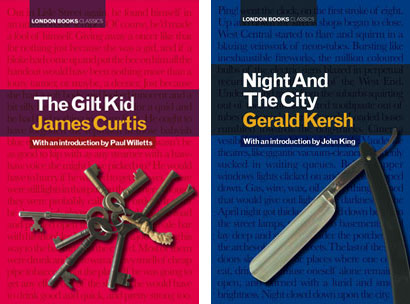 I think we mentioned London Books some time back, but now the first cult crime novels have been issued by the publisher under its London Classics banner, it’s a good time to re-visit.

Three lost gems are now available to order – A Start In Life by Alan Sillitoe, The Gilt Kid by James Curtis and Night And The City by Gerald Kersh. A Start In Life is the story of Michael Cullen, a chancer who leaves late 60s Nottingham to make a name and some money in the Soho underworld. Apparently an inspiration for the Budgie TV series, it is reissued with a new introduction by the author.

Both The Gilt Kid and Night And The City are gritty crime tales from 1930s London, the former focusing on an ex-con struggling to stay on the straight and narrow, the latter focusing on the tough Soho streets of the era.

The Gilt Kid and Night And The City are available now for £11.99 each (slightly cheaper if you buy both), with A Start In Life to follow soon.