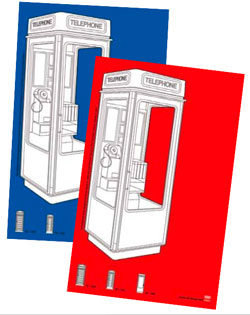 The design of the phone box was by Bruce Martin, using clean lines and less parts than the previous box. The 20th Century Society is seeking to have the last few listed – and this is where you come in.

Proceeds from the tea towels support the society, which indirectly helps the boxes. The designed on the 100 per cent tea towel is by Retro To Go favourites People Will Always Need Plates, with the design screenprinted onto the 76 x 48cm towels. You get two of them, along with a brief history of the box by Gavin Stamp.

And that package (a certain collectable of the future) costs just £12.

Find out more at the 20th Century Society website