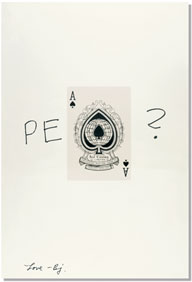 Robert Brownjohn was an influential figure in graphic design in both 1950s New York and 1960s London. His work included titles for James Bond films and artwork for the Rolling Stones. The Design Museum recently had an exhibition of his work and although it is too late to see the show, it is not too late to buy one of the limited edition Peace prints commissioned to accompany it.

The Peace poster features the ace of spades between a scrawled P and E with a question mark and was the last piece of work he completed before his death in 1970. It was commissioned to support the New York Peace Campaign in 1969.

This edition consists of 100 numbered prints, on sale for £75. If you like the design but not the price, there is also a poster version available for £5. Visit the Design Museum Shop to buy.