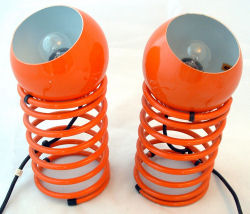 I ’ve come across several versions of the Zebedee Lamp on my internet travels recently. They are all shaped like the beloved Magic Roundabout character, a heavy steel spring with a ball light on top.

Pineapple Ice Bucket are currently selling a pair of in orange enamel for £65 (they are in a worn condition) that were made by Herbert Terry & Sons in the 1970s. A similar single lamp is also from Haus for £70.

Retro Sixty have a white version that they are attributing to German designer Maurer and dating as from the late 1960s. This one is for sale at £85 in good condition.

Destination silk memento cushion from RE

One thought on “Zebedee Lamps”