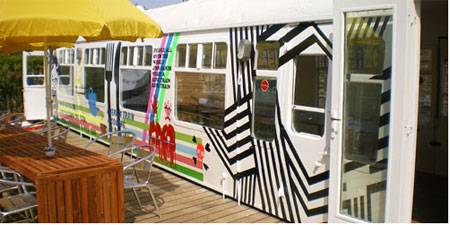 Quirky design or a clever piece of recycling? Take your pick for the Deptford Project Cafe.

Newly-opened on Deptford High Street, it’s the first step in a project to completely regenerate the area around Deptford Train Station. The cafe is the work of designer Morag Myerscough, with help from architects Richard Rogers and Alison Brooks, converting a 35 tonne 1960s South East Trains carriage into a coffee bar/eaterie with a very stylish interior and designer fittings (including classic Aalto stools).

All food is home made and the coffee is fair trade. Check it out at 121-123 Deptford High Street, London SE8. It opens seven days a week from 8am.

For sale: The Harriet and Randall Fawcett Residence by Frank Lloyd Wright near Los Banos, California