Skip to content
145shares
Note all articles are independently researched and written by myself. However, if you buy via one of the links it may be an affiliate and I may earn a small commission. 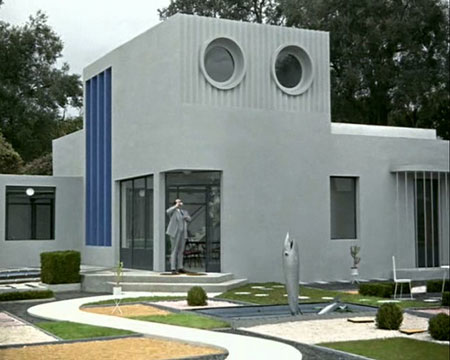 If you're a fan of Le Corbusier's modernist design and architecture, you just might want to get yourself down to London's Barbican for the appropriately-named Visions of Utopia: Le Corbusier at the Barbican.

The season runs from 7th March to 10th May, with the Barbican highlighting events, films, music, performances and talks accompanying the Barbican Art Gallery exhibition Le Corbusier – The Art of Architecture (more on that later). Some of it might be a little too heavy but related movie showings including Jaques Tati's Mon Oncle (pictured above) are certainly worth checking out. See over the page for the full program.

TOTAL IMMERSION: IANNIS XENAKIS – Saturday 7 March
A double bill of films about the life of the Greek composer, musical theorist and architect Iannis Xenarkis, including an exploration of the Dominican monastery he worked on with Le Corbusier.

VU-TOPIA – Saturday 28 & Sunday 29 March
A weekend series exploring architectural utopian fantasies and cautionary dystopias brought together by Building Futures, an RIBA initiative. Vu-topia presents a series of short films, features and documentaries that span the last century to the present day, all projecting new worlds. Le Corbusier embraced the media of film to convey his architectural ideologies; this film series explores the future that he presented and reveals our oscillating visions of things to come.

Saturday 28 March
8.00pm – Homes for the Future: Mon Oncle (France 1958 Dir Jaques Tati 117 min) with introduction by Francois Penz, University of Cambridge.
From American 1950s suburban promise of a bright future with the help of multi-talented robots (Leave it to Roll-Oh) to Charley’s plan to wave good bye to overcrowded cities in favour of the UK’s new towns, this session looks back at the post-war optimism and the modern home. But this futuristic living ideal and gadgetry is not embraced by all, as Mon Oncle’s Monsieur Hulot is quick to reveal.
+
Charley in New Town (UK 1947 Dir John Halas and Joy Batchelor 8 min)
+
Leave It To Roll-Oh (USA 1940 Handy Organization 9 min)

Sunday 29 March
8.00pm – The fight for a future: Garbage Warrior (UK 2007  Dir Oliver Hodge 86min)
Faced with the challenge of depicting environmental challenges, cinema has portrayed both societal ‘meltdown’ provoked by ecological disasters as well as stories from a more hopeful perspective. This session deals with both. Garbage Warrior tells the tale of eco-architect Michael Reynolds and his quest to build off-the-grid self-sufficient communities, followed by the highly dystopian end of the world animation of The Ark. This in turn will be followed by Nic Clear of UCL presenting a series of shorts that look at architecture’s role in the near future, an architecture of high-tech, low-tech and even no-tech.
+
The Ark (Poland 2006 Dir. Grzegorz Jonkajtys 8min)

+
Shorts from Unit 15 at the Bartlett School of Architecture

ARCHITECTURE ON FILM: Colossal Youth (Juventude Em Marcha) (France/Portugal/Switzerland 2006  Dir. Pedro Costa 155 min) – Monday 30 March, 7.00pm
Part of Barbican Film’s bi-monthly partnership with The Architecture Foundation, Architecture on Film examines the built environment’s depiction in cinema. The third instalment of celebrated experimental director Pedro Costa’s filmic collaboration with the inhabitants of Lisbon’s Fontainhas slum, Colossal Youth frames its characters' lives within a unique hybrid of documentary observation and fictional re-enactment. As their neighbourhood is razed around them, the community is transferred to a new government-planned settlement, and the film posits a conflict between grand social architectural gestures and informal developments. A challenging work, whose grace and existential grandeur offer a rewarding meditation on place and people, Colossal Youth is an immersive experience from one of cinema’s most singular voices.

UNE VILLE À CHANDIGARH (India 1965 Dir. Alain Tanner 54min) – Saturday 18 April, 2.30pm
Dubbed the ‘utopian poster city of the twentieth-century’, Le Corbusier’s masterplan for the capital of Punjab was never completely finished. Celebrated Swiss director Alain Tanner began making Une Ville à Chandigarh one year after the death of Le Corbusier, when the city was still in the early stages of construction but the residents were already pouring in. Then in Tower of Shadows, artist Corey McCorkle focuses on a Chandigarh folly, the Tower of Shadows; a pavilion which now stands as a relic of these modernist visions. This programme complements the Chandigarh Lates event in the Gallery on Thursday 16 April.
+
Tower of Shadows (India/US 2006 Dir. Corey McCorkle 3min)

MUSIC FOR MILTON COURT – Friday 1 May, 1.15pm
Milton Court, on the north-eastern corner of the Barbican Estate, was demolished to enable the creation of state-of-the-art new performance spaces for The Guildhall School of Music and Drama. The dismantling of the disused fire station was recorded with a static camera providing a visual symphony of the destruction as a new city tower rises in the background. At this free lunchtime event musicians from the conservatoire perform soundtracks composed to segments of the film in classical, jazz and electronic forms.

BARBI-TOPIA WITH INTRODUCTION BY DAVID HEATHCOTE – Saturday 9 May, 2.00pm
Built out of the bomb craters of the blitz, the Barbican is one of the world’s largest modernist developments and was directly influenced by Le Corbusier. This programme is an unmissable chance to see rare archive documentaries that tell the story of the Barbican from drawing boards full of post-war visions for a new tomorrow to today. Highlights include footage of the acres of rubble from which the Barbican rose after the war in Barbican Regained, alternative plans for the Centre in Top People and an hilarious behind-the-scenes peak at the reality of Barbican life in the 80s.

HANDS OVER THE CITY (Italy 1963 Dir. Francesco Rosi 105min) – Saturday 9 May, 4.00pm
Trying to emulate the success of the Barbican but on a smaller budget, cheaply produced high-rise housing developments (especially those in Britain) instead tainted the legacy of Le Corbusier and modernism. In Rosi’s masterpiece of social realism, a corrupt Neapolitan politician orchestrates a real-estate swindle developing shoddy new apartment blocks with disastrous consequences.

LE CORBUSIER (France 1987 Dir. Jacques Barsac 180min) – Sunday 10 May, 2.00pm
The definitive Le Corbusier documentary, this comprehensive and insightful three part film chronologically explores his life and work. A detailed portrait of this renaissance man of modernism, Le Corbusier includes 1950s interviews with the architect in which he explains his approaches
in design, but also his painting and writing. A wealth of archive footage is used to contextualise Le Corbusier’s ouvre within the broader landscape of the twentieth century. There will be brief intervals between each 60-minute film