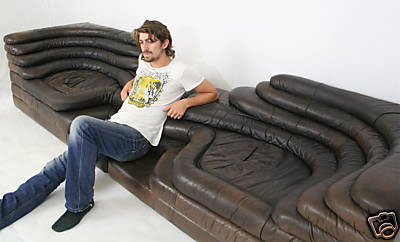 Film buffs will recognise the sofas above from the cult sci-fi thriller Logan’s Run, while design fans will know them as the ultra-rare De Sede DS-1025 modular sofas. And they’re up for grabs on eBay.

Designed by Ubald Klug in 1973, the space age De Sede DS-1025 made a fitting appearance soon after in Logan’s apartment in Logan’s Run, as well as in various high-end designer shops of the era. Both sit together to create a ‘terrace-like’ design for your living room. And these particular examples (in cigar brown leather) are described as being in ‘fantastic’ condition – the lived-in look of the leather only adding to the overall appearance.

You’ll need some serious space in your home to use them, not to mention some serious cash to buy them. They’re on a ‘Buy It Now’ for £6,650, with a ‘Best Offer’ should you wish to chance your arm.

And thanks to Andrew for the tip off!