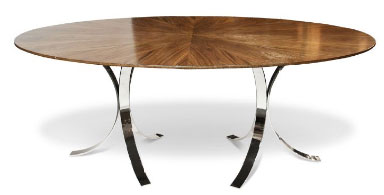 And that’s not the only vintage inspiration on display here – the table is described as ‘a contemporary interpretation of the classic Saarinen table’, keeping the same profile, but offering a walnut veneer and curved polished nickel legs, with a size that’s good for between six and eight diners.

Jackson industrial-style pendant lights at Made