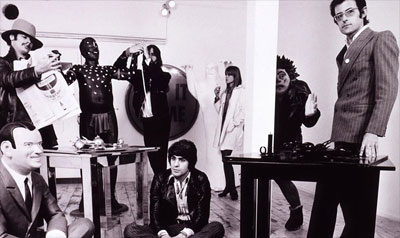 If you have any interest in the 60s London art scene, you might want to get down to Robert Fraser: Groovy Curator on 27th January 2009 at London’s Barbican.

The event is a mix of talk and rare art films, the former being a Q&A with Harriet Vyner, the biographer of famed London art dealer Robert Fraser, the man responsible for introducing the London art world to Peter Blake, Jim Dine, Richard Hamilton, Bridget Riley and Andy Warhol among others. Vyner’s book – Groovy Bob – tells Fraser’s story through the voices of those who new him best, which includes the likes of Paul McCartney, Mick Jagger, Keith Richards, Marianne Faithfull, Kenneth Anger, Dennis Hopper and Vyner herself.

Aside from the Q&A, four rarely-seen associated films are also showing – see over the page for full details of those. Tickets are available now, priced at £7.50.

Fathers of Pop (15*)
This rarely-screened documentary film, made with the support of the Arts Council, looks at the Independent Group (1952-1955), who saw themselves as a breakaway faction of the ICA, and their influence on the British Pop Art generation.

The Group were among the first British artists to explore both the horrors and promises of technology, space-travel and the consequent new sci-fi genre, and "the technicolour dreams [of] American media".