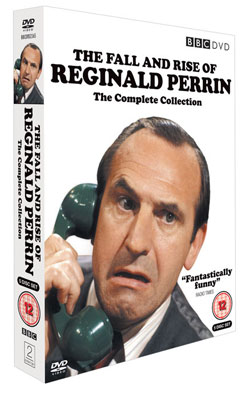 With the remake soon to hit our screens, it seems like the perfect time to reissue one of the finest sitcoms ever produced by the BBC – The Fall And Rise Of Reginald Perrin.

Written by David Nobbs and starring Leonard Rossiter, it's a dark (but very funny) tale of a man desperate to escape his dull marriage and even more dull job – and that mid-life crisis pushes Reggie to 'disappear', only his clothes left on a beach.

Over the three series that follow, we see Reggie return in a variety of guises, one of which remarries his former wife and gets his old job back – before getting sacked for being Reggie. He then opens Grot (a shop selling rubbish), turning it into a business empire, then quits the rat race once more to open his own commune.

The boxset packs in every episode (running for a total of 845 minutes), throwing in some extras including the Legacy of Reginald Perrin series, Comedy Connections: Reginald Perrin and a skit from The Funny Side of Christmas. It's out on April 27th 2009, available from Amazon for a bargain £17.98.