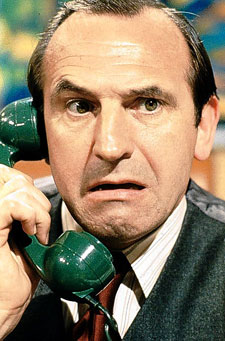 Arguably one of the finest sitcoms ever made, The Fall And Rise Of Reginald Perrin is now being given the remake treatment by the BBC.

The original, written by David Nobbs, starred Leonard Rossiter as a sales executive in the midst of a mid-life crisis and on the brink of a nervous breakdown – telling the world what he thinks before finally departing the daily grind for a new life as a new man.

According to the BBC, the new version will be written by Nobbs and Simon Nye, with Martin Clunes will take on the title role of Reggie Perrin, supported by Fay Ripley (Cold Feet), Wendy Craig (Butterflies, The Royal), Geoffrey Whitehead (Worst Week Of My Life), Neil Stuke (Game On) and Lucy Liemann (Moving Wallpaper). Six episodes are being filmed for showing later in 2009. It could be good, it could be bad – but I suspect it will not be a patch on the original.

Coming soon: The Sweeney – The Complete First Series on Blu-ray

Nobody Puts Baby in a Corner by Coulson Macleod