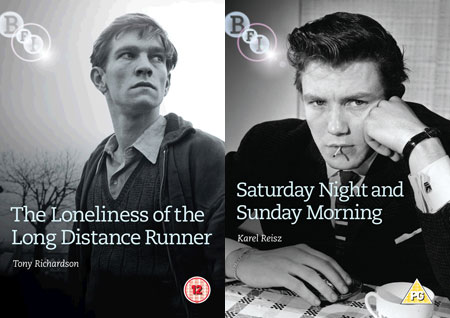 Two British New Wave classics are re-issued on DVD and released on Blu-ray in new high definition transfers by the BFI on 23rd March 2009 – Saturday Night and Sunday Morning and The Loneliness of the Long Distance Runner.

Saturday Night and Sunday Morning (1960), stars Albert Finney, Shirley Anne Field and Rachel Roberts. In the industrial streets and factories of Nottingham, Arthur Seaton (Albert Finney) spends his days at the factory bench, his evenings in the local pubs and his nights in the arms of Brenda, the wife of a fellow factory worker. Arthur is anti-authority and unashamedly amoral – indeed, he's the original 'angry young man.

Special features include a film commentary by Robert Murphy, Alan Sillitoe and Freddie Francis and a new filmed interview with Shirley Anne Field, as well as director Reisz's We Are The Lambeth Boys documentary from 1959.

The Loneliness of the Long Distance Runner (1962), stars Michael Redgrave and Tom Courtenay as the defiant teenager rebelling against the system who discovers a talent for cross-country running.

Special features on this one include a commentary by Robert Murphy, Tom Courtenay and Alan Sillitoe and Tony Richardson’s Free Cinema documentary Momma Don’t Allow (1956).

Original 1960s Batmobile up for sale