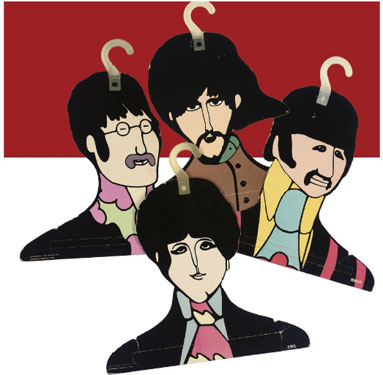 We're a sucker for an auction and they rarely get much better than the Christie's auctions, including the forthcoming Pop Culture auction, which takes place at the South Kensington sale room on 1st July 2009.

As you might expect, there's everything on offer from early Bill Haley and Who posters through to psychedelic artwork, gold discs, rare records, and endless amount of signed gear and of course, lots of items relating to the biggest names in rock, pop and indeed art.

We've picked out these Beatles Yellow Submarine hangers as just one example. Made by Henderson Hoggard back in 1968, each one is a cardboard cut-out of the cartoon Fab Four, sized around 17 inches across. They probably cost buttons back in the day, but right now you're looking at between £600 and £800 to own them. Check out all the lots from the sale via the link below.

The Eye Test Charts by Wasted and Wounded