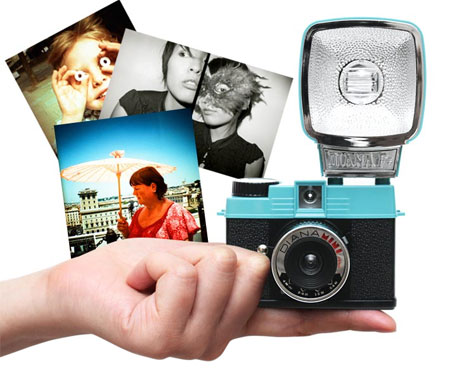 You may recall we ran a top five 60s-style cameras feature earlier in the week at our Modculture site, which featured the original Lomo Diana camera. Well, typically, as soon as we ran that feature, a new version appeared – known (for obvious reasons) as the Diana Mini.

It's essentially a miniaturised version of the original 60s-inspired Diana cam, this one offer up the option to shoot old-fashioned square shots or half-frame shots, basically two shots in the same image side by side, which means you can get 72 images on one roll of 35mm film. You can even swap between the two with a flick of the switch.

You can also shoot long and multiple exposures and add a flash for better images in poor light, all from a film camera that's small enough to fit into your trouser pocket – unless that flash is attached. Prices vary depending on the package you got for, but sell from £46.90 with the 'Shoot Forever' Diana Mini Book thrown in for free.