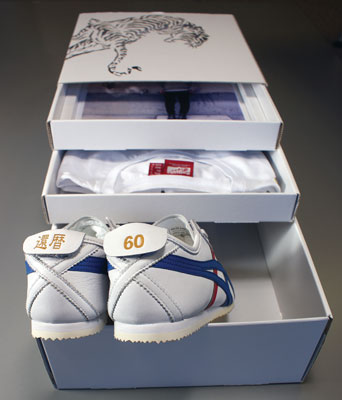 Next week Onitsuka Tiger will be celebrating its 60th anniversary, a key figure in Japanese culture, so to celebrate, the company is bringing out some limited edition gift sets that feature key styles from the range. Certain to be future collectables too.

Just 240 pairs will be available (60 pairs of each anniversary design), sold in a special box that also contains an exclusive anniversary T-shirt and a copy of a specially commissioned collector’s edition magazine entitled Made of Japan. The magazine is made up of 260 pages covering Onitsuka Tiger’s heritage, its vision and evolution, and its influence as a 'style icon' throughout the world.

All the designs will be in the original Onitsuka Tiger colours of white, red and blue, with high-end finishes and exclusive detailing, as well as being exclusive to these box sets. But you'll have to be quick off the mark and be in the right place to get one of the £100 sets when they go on sale on 1st September 2009.

The Mexico 66 Lauta set will only be available in Offspring Dean Street and Onitsuka Tigers’ stores in Liverpool and London. The Ultimate 81 will only be sold in Size? Carnaby Street and Onitsuka's Liverpool and London outlets, while the Fabre BL-L will be an exclusive for the Onitsuka Tiger stores. You might want to enquire about an order right now.

Sale watch: Clarks offers up to 60 per cent off including Orla Kiely range