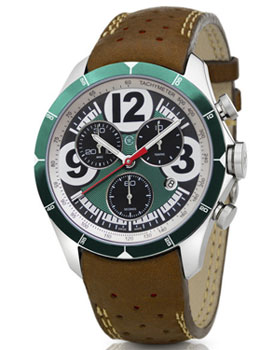 The Steve McQueen-inspired Tag Heuer Monaco has ruled the roost for years when it comes to Le Mans-related watches, but here's another tasty and related timepiece that's a fraction of the price – the C70 Aston Martin DBR1 watch by Christopher Ward.

It celebrates Aston Martin's victory at Le Mans in 1959, with details, including the winning Aston Martin DBR1's livery, incorporated into the design of the watch, which is limited to just 500 pieces worldwide.

In terms of specifics, that means a British Racing Green bezel, with the dark charcoal trim of the car used as the background colour for the face and three dials.  Even the watch’s hands pick up on the DBR1's white needles on the speedometer and fuel gauge and its red rev counter. Those large numbers on the dial reflect the giant numbers in white circles that were on the side of every 1959 Le Mans car.

Get nostalgic with the Cassette Face watch