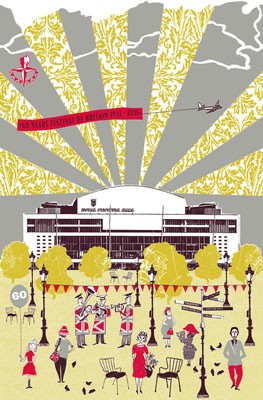 Wallpaper designer Lizzie Allen has been commissioned to produce this Festival of Britain print which ties in with the Royal Festival Hall's 60th anniversary next year.

Allen's work frequently draws inspiration from 1950s illustrations, such as with her City Gents wallpaper and this design – and subject matter – reflects that interest. The reduced colour palette of yellow, red and grey creates a period feel and draws attention to the gleaming new Festival Hall in the background. There's also an atmosphere of fun – from the aeroplane in the sky, to the brass band, to the 60th birthday balloon.

Buy it from the Southbank Centre 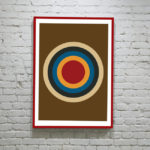