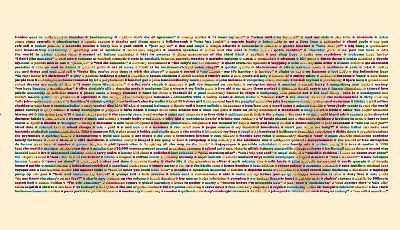 Still on an Eighties words theme, although at the opposite end of the price scale from the cards below, is Dexter’s World “Subliminal Thatcher” print.

York-based artist Dexter bills his work as trying “to make sense of the 21st Century by recreating the recent past”, which he does by creating pieces consisting of hundreds of words (product names, television programmes, band names, songs, films etc). In this piece, he has added some clever shading over the 80s words, so that the portrait of Margaret Thatcher can be seen casting an ominous shadow over the picture, just as she did over the decade.