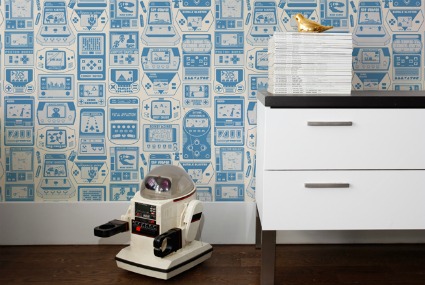 Aimee Wilder's love of a retro pattern is no secret: just take a look at her robot and cassette tape inspired wallpapers that we've previously featured. Her new Gameland wallpaper also looks to the past and is based on images of video games.

The wallpaper is covered with a repeated pattern showing various different consoles. Each of the console is showing a different should-have-been video game with titles like Fossil Hunter, Vector Galaxy and Vampire Smash, with scenes from the games rendered in true period pixellated style. There are eleven different colourways to pick from, including some metallic finishes.

Buy it from her shop