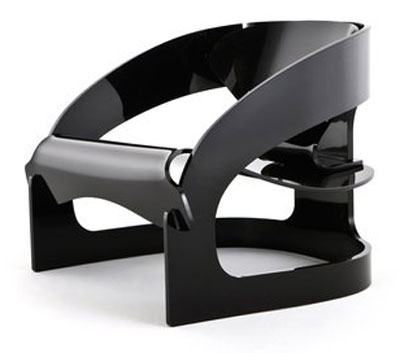 Interesting design alert, with the Kartell 4801 Armchair by Joe Colombo available to buy once more, over 40 years after it was first introduced.

Colombo designed the chair earlier than you might think, with this early space age gem first appearing in 1965. It was also originally produced in plywood, not the plastic Kartell tended to work with essentially because the curves couldn't be produced in plastic at the time.

Saying that, this 2011 reissue has been produced in plastic rather than wood, but has exactly the same proportions. Whether you'd want to sit in it for a length of time is another thing – but it'll look stunning in your living room regardless of its use as a seat. This is a genuine design classic.

Find out more at the Made in Design website