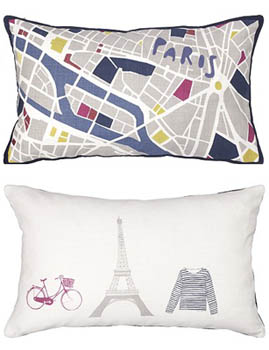 John Lewis celebrates some of the world’s best cities through a range of cushions, including this Paris Icons Cushion.

The front of the cushion features a map of Paris, reduced to a graphic design that could just be taken for an abstract print. Flip it over and you have three things considered to be icons of Paris: the Eiffel Tower, a bicycle with basket on the front and a striped top. Similar treatment has been given to New York and London, with their icons being the Statue of Liberty, yellow cab and a big apple, and Big Ben, a London bus and a cup of tea respectively.

The cushions cost £35 each from John Lewis.