Once upon a time, it was the home of electrical engineer Anthony Greenhill and his audio and light experiments. Now, this 1930s Mollie Taylor-designed Kilowatt House art deco property in Bath, Somerset has been renovated and available as a family home.

The house was built between 1935 and 1938 and described as Bath’s only Modern Movement house. It was built for Mr Greenhill, who kitted the place out as a laboratory for sound and visuals. Sadly, all of that kit disappeared as the house was left derelict for many years. But now it has been given a makeover. In fact, this grade II-listed house had something of a luxury finish applied, such perhaps has removed some of the character, but the shell of the house remains very much intact. In terms of space, you get four bedrooms, two reception rooms, three bathrooms (one en-suite to the master bedroom), large modern kitchen, an atrium/entrance hall and a feature staircase. Outside, you’ll find an enclosed rear garden, a paddock area, a deck rear patio with modern lighting, a double garage and electric security gates. 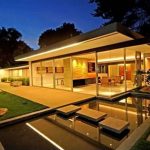