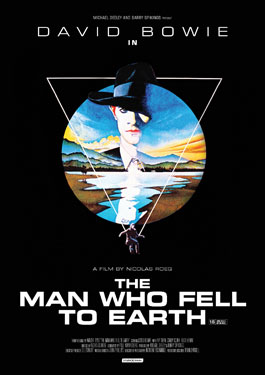 Classic British movies are back at UK cinemas, courtesy of the Made in Britain season. Not just big cities or arthouse cinemas either, the films are doing the rounds all over the country and in the kind of places you don't expect to see cult classics.

The movies in question are Passport To Pimlico, Plague Of The Zombies, The Man Who Fell To Earth, Quatermass & the Pit and Hobson's Choice. All have been chosen because they have received extensive digital restoration but have not been seen widely on the big screen for some time. Now is your chance.

Or rather, a national screening event every Tuesday from June 5th to July 3rd inclusive is your chance, when each film will screen digitally in cinemas across the country. On top of that, new posters have been produced for the releases, which should be on display at the cinemas in question. Love the classic The Man Who Fell To Earth above, but others are new, including an Olly Moss design for Quatermass & the Pit (below). 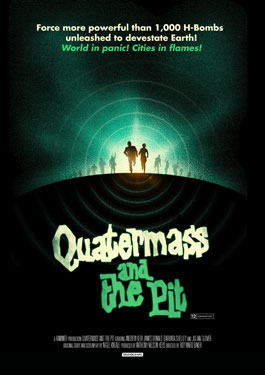 You can find out more at the Facebook page, with the full schedule available here. Read on below for a brief synopsis of the movies in question.

Passport to Pimlico (1949)
Tuesday 5th June
An Ealing comedy, about a group of Londoners who protest their right to be 'Burgundian' following discovery of an ancient charter in a WWII bomb crater.

The Man Who Fell To Earth (1976)
Tuesday 19th June
Nic Roeg’s sci-fi classic starring David Bowie about an alien who comes to Earth seeking a solution to his home planet’s woes, only to find himself lost in an unfamiliar, corrupt and sometimes hostile society.

Hobson's Choice (1954)
Tuesday 26th June
David Lean directs Charles Laughton and John Mills in this tale of a hapless 19th century boot-maker, rather too fond of his local pub and trying to cope with a trio of daughters.

Quatermass & The Pit
Tuesday 3rd July
Hammer take on the BBC series and hugely influential film in itself, as an object found in a London archaeological dig has sinister consequences.