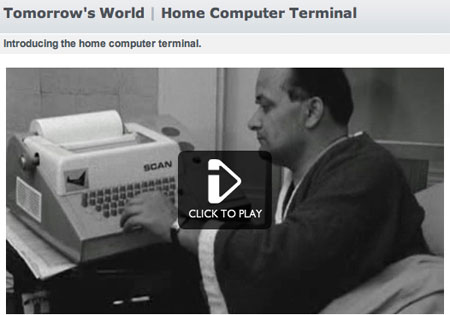 From 1965 through to 2003, the BBC gave us all a glimpse (rightly or wrongly) into the world of the future. That show was called Tomorrow's World and from today, you can re-live those predictions online, with the BBC uploading the best (and worst) clips for us all to enjoy again.

Which means we can see the first-ever show (life on Mars and flood defences), along with the home computer terminal (1967), artificial gardens (1968), a computerised school, the robot-run office and the Moog synthesiser (all 1969), the first cordless mobile phone from '79 and…well, just about anything else weird and wonderful you can think of, including a man speaking Morse Code to a computer. Yes, really.

For non-UK readers, not sure if this is viewable outside the BBC's native land, but give it a try – it's well worth the effort.

Tomorrow's World Archive on the BBC