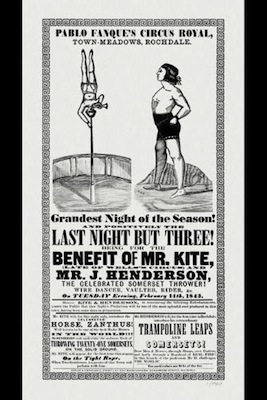 Not just a curious letterpress piece of artwork but the original version of this Being For The Benefit of Mr Kite print also earned its place in pop history.

Yes, it's this print which inspired the song of the same name on Sgt. Pepper's Lonely Hearts Club Band. Apparently Lennon picked up the nineteenth century original in an antiques shop and later turned to it for inspiration. This version replicates the original, down to being hand letter-pressed.

It's been produced in limited numbers – 1967 to be exact, a nod to the year the album was released.

Order it from Rockett St George