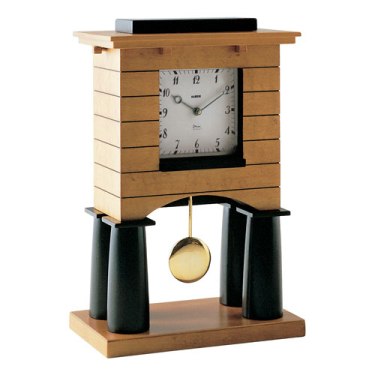 The Alessi Mantle Clock by Michael Graves has been reissued in 2013, updating the original version from 1988.

It is not the fact that this dates back to the late 1980s that makes it count as retro (although that is perhaps long ago enough to count?), but it style references an older period in time.  The clock was designed during Michael Grave's postmodern phase of referencing the Biedermeier period.  Biedermeier was an influential style of furniture design from Germany during the years 1815–1848, based on utilitarian principles and it has had a strong influence on 20th century design with its simplicity and clean lines.  The clock is made from maple veneered wood and costs £150.